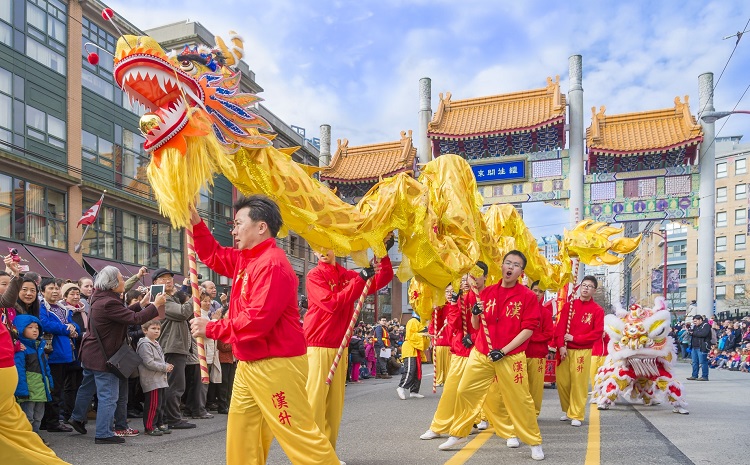 Chinese New Year, also known as Lunar New Year or Spring Festival, happens on the new moon of the first day of the year in the traditional Chinese calendar. In this calendar, months are based on the lunar cycles so Chinese New Year moves around between January 21 and February 20. This year it falls on February 12.

Like Christmas, people celebrate both the Chinese New Year’s Eve, when families gather together for big family dinners, and the New Year’s Day, when all the celebrations begin.

What Do People Do?

Chinese New Year is a vibrant and festive occasion for many people in Canada. This event can last for many days and often includes various festivities such as street parades and festivals featuring dancing, traditional Chinese costumes, firework displays, food stalls, and arts and crafts.

Many Chinese Canadian families spend time together giving gifts, particularly red envelopes with money (Hong Bao, Ang Pao, or Lai See) that are normally given to children. Some Canadian organizations have also participated in Chinese New Year through various activities over the years. For example, Canada Post issued special stamps to welcome the Chinese New Year in previous times. The Royal Canadian Mint also marked Chinese New Year with a new series of coins in the past.

The Chinese community in Canada has a long history dating back to the 19th century. The Chinese moved to Canada for various reasons related to employment and opportunities associated with the Canada’s growth. All across Canada, starting in the 1890s, cities and larger towns began to develop their own Chinatown districts.

British Columbia was home to more than 60 percent of Canada’s Chinese before World War II, according to sources such as Library and Archives Canada. But for many years after a ban on Chinese immigration was revoked in 1947, the province received only one-third of new Chinese immigrants. This meant that Chinese families were settling all across Canada. Canada is today seen as a multicultural country in which festivals such as Chinese New Year are celebrated each year.

Chinese New Year has various symbols and traditions. For example, flowers are an important part of New Year decorations. Writings that refer to good luck are often seen in homes and business environments. They are usually written by brush on a diamond-shaped piece of red paper. Tangerines and oranges are also displayed in many homes and stores as a sign of luck and wealth.

Envelopes with money (Hong Bao, Ang Pao, or Lai See) often come in the color red, which symbolizes happiness, good luck, success and good fortune. These envelopes are mainly given as presents to children. Each Chinese New Year is associated with an animal name for one of 12 animals in the Chinese zodiac.

Year of the Ox

According to the Chinese calendar, the year you were born may determine your personality. Every year is represented by an animal, and legend has it that people born under that animal have certain personality traits. The year 2021 is the year of the Ox.

The Ox is the second of all zodiac animals. According to one myth, the Jade Emperor said the order would be decided by the order in which they arrived to his party. The Ox was about to be the first to arrive, but Rat tricked Ox into giving him a ride. Then, just as they arrived, Rat jumped down and landed ahead of Ox. Thus, Ox became the second animal.

In Chinese culture, the Ox is a valued animal. Because of its role in agriculture, positive characteristics, such as being hardworking and honest, are attributed to it.

What is the Chinese Zodiac?

The general consensus is that the zodiacs originally had something to do with the worship of animals. A zodiac system has existed in Chinese culture since the Qin dynasty, more than 2,000 years ago.

Over time the zodiacs became more and more integrated into everyday life, with different meanings and characteristics assigned to each animal. This in turn gave rise to various compatibilities (and incompatibilities) between each zodiac, and play a major role in marriage and career decisions, fortune-telling and more!

The animals that make up the Chinese zodiacs are:

The zodiac cycle repeats every 12 years, making it easy to figure out whether it’s your year- just check if your age is a multiple of 12!

Like for Christmas and Hanukkah, the prime minister issues a statement for the holiday, wishing a happy New Year to all Chinese Canadians. On 1 June 2016, the Parliament of Canada passed a proposal to recognize the Chinese New Year as an official holiday in Canada.

Chinese culture is a significant part of Canada’s multicultural environment. Despite people from different regions of China celebrate the New Year differently, it marks a great symbol of Chinese traditions, as people of various backgrounds are starting to enjoy its celebrations.

‘Fight racism in all forms’: How you can help Asian communities right now

After dropping off flowers Jesus Estrella, left, and Shelby stand in support of the Asian and Hispanic community outside Young’s Asian Massage Wednesday, March 17, 2021, in Acworth, Ga. (Curtis Compton /Atlanta Journal-Constitution via AP)   The recent crimes against …

Greetings everyone. September 2021 Return to Public Post-Secondary Campuses: On Monday March 8, 2021 the Provincial Health Officer (PHO), Dr. Bonnie Henry, advised the presidents of all public post-secondary institutions to prepare for a full return to on-campus teaching, learning and research …